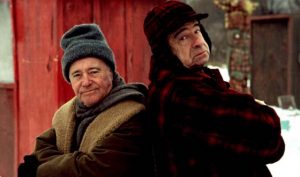 Jack was a widower who lived in Newcastle with a granny flat out the back in which his mate Eric had lived for more than 20 years since Jack’s wife died.  Good mates for years,  there had never been any formal lease agreement and Eric paid Jack around $200 per week for food and board into a joint account.  They’d share a smoke and a beer most nights on the back verandah.  Jack’s kids treated Eric like an Uncle.

Eric had worked as a general labourer with Jack on the railways and was retired on the aged pension, he had no close family and only a few dollars in the bank.

Jack died in his early 70’s from lung cancer leaving his house and assets to his children in a will that had been prepared 25 years earlier when his wife Thelma was still alive.  The kids lived in Sydney and Melbourne with big mortgages and the inheritance was going to make a massive difference to their debt situation.

After the funeral they spoke with Eric about the will and where he was going to live once they sold the house, ….I don’t know kids, I have nothing to me name and nowhere to go, I just don’t know…

The weeks rolled and Eric didn’t move, the kids became uncomfortable and raised the issue a few times with no success.  Eventually they sought help from a solicitor and Eric received a legal letter telling him he had 30 days to move out.

28 Days later the kids received a letter from a lawyer representing Eric claiming financial dependency on their father and challenging the will.  In the letter Eric claimed that Jack had promised that he would always have somewhere to live and in exchange Eric had shared expenses and done a lot of maintenance for Jack around the home.  Over the years their co-dependency provided some strength to the argument that Eric had certain rights to expect consideration in Jack’s estate.

How Could This Situation Happen?

Essentially Eric acted out of desperation.  He had nowhere to go and despite his loyalty to Jack and the children the eviction letter forced him to seek legal advice.  Eric’s lawyer was astute enough to mount an argument that had sufficient weight to get into court.

Ultimately the children settled the matter out of court not wanting to take the risk that Eric’s financial need outweighed theirs.  Eric received a substantial settlement which met his legal fees and provided him with sufficient funds that he could use to find alternative accommodation for the rest of his life.

He never spoke to the children again.

How Could This Be Avoided?

A start would be a formal lease agreement over the granny flat with detailed records about costs and expense sharing.  The documentation should be prepared by a professional lawyer with suitable skills and reviewed regularly.  Jack could have made provision of say 5 years rent money for Eric in his will so that Eric had enough money and time to find a new place.

Eric never wanted to sue, he was just left with no choice.

Had Jack’s financial adviser asked him about financial dependants (not just family dependants) then Eric’s situation would have come to light.  A new will and a conversation with Eric about how he was being looked after would probably have avoided the nasty situation.  The WITYEP survey in the Estate Planning For Life (EPFL) system enables advisers to uncover these situations easily and efficiently enabling the EPFL adviser to facilitate an outcome via with legal support that had minimal risk to all parties.