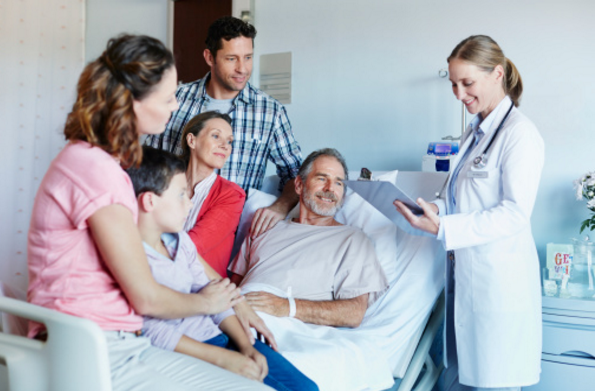 Giles was an intelligent and independent man in his 60’s with a chronic heart condition. He was kept healthy and relatively active by the outstanding medical collaboration between his GP and Cardiologist and was on a cocktail of medications that had been trialed, tested and finely tuned to suit his lifestyle. Nonetheless Giles was prone to angina and had cardiac incidents every few years.

One Saturday afternoon whilst visiting his daughter Jane Giles collapsed in the city centre with his wife by his side and was taken to the local base hospital where he was treated by the emergency doctors. These doctors, whilst hard working professionals, cater for all emergencies and were not expert in the latest treatment of cardiac patients. They correctly asked Giles’ daughter Jane about his drug regime and asked about his GP and Cardiologist. Unfortunately being a weekend they could not reach Giles’ doctors and Jane knew little of her father’s medication regime.

Using their best judgement the doctors administered some new drugs to treat Giles’ heart attack. The effect was not good, his condition worsened and the signs were not improving.

Over the next 36 hours Giles’ condition became perilous however the doctors persisted with the drugs that they were using to treat him as these were tried and true regimes. Fortunately Giles’ wife Margaret was able to get to Giles bedside early on Monday morning.  She was familiar with the cocktail of drugs that Giles had been taking to keep his heart in step and appealed to the doctors to restore him to his previous treatment plan. After several hours of heated arguments and a phone call to the cardiologist Margaret was able to convince the hospital doctors to modify his treatment programme.

Giles stabilised over the next 24 hours and recovered enough to be transported to a major hospital with a cardiac department for treatment and ultimate recovery, although this took more than 3 weeks.

To be fair to the local doctors they were following the correct protocol however the reality of modern medicine means that drug therapies are changing all the time and until patients medical records are available everywhere at the press of a button we run the risk that Emergency Room and local hospital doctors will be acting without adequate information.

The EPFL Information That Matters report provides a detailed medical history that can be updated regularly and provided to doctors in the event of emergency.  Rather than taking days before the information was made available Giles could have carried the record on his phone or in his wallet and provided it to the doctor at the beginning.